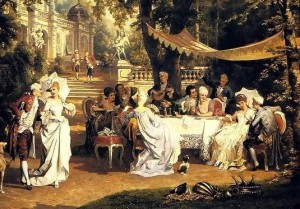 Last week I told you about a conversation my wife and I started having about writing.
“I wouldn’t know where to start writing a novel,” she said.
“It all starts with an idea, a ‘what if?’.” I answered. So, last week we talked about where you get your ideas. That wasn’t enough for my wife, though.
“Yeah, but all that dialogue,” she said, “where do you begin writing that?”
“Backstory, I guess,” I said. “I start by figuring out who my characters are. I don’t try to write anything until I’ve got that sorted.”
Backstory is, perhaps, the most critical step in the creation of a novel for me. To write a character, I have to feel like I know them well enough to invite them to a birthday party. That’s actually a great way to get to know your characters.

If you’re having trouble getting a handle on someone in your novel, imagine that you are out on a double date with them, or that you’ve invited them over to your house for a party.

Ask them the typical questions that you get asked at a party. How would they respond? What questions would they ask you? Who would they get along with? If you want to make things interesting, imagine a crisis: a motorcycle drives through your fence, you find out your sister has been sleeping with that character, you ran out of dip. What does that character do?

After I nail down the backstory of my characters complete with at least a few childhood memories and the track of their life decisions, then I pen that down on an index card. From that point on, all I have to do is put that character in the room with another character and a subject to talk about. They do the rest.
“When you know your characters, you don’t have to worry about dialogue,” I told my wife. “You just let them talk. If you start hearing words come out of their mouths and thinking, ‘that doesn’t sound like Shirley,’ then you know that you’re taking over and putting those words in there.”
Sure, writing this way may lead to some rambling conversations about trivialities, but that’s often what makes the dialogue interesting. It’s the details that tell the story. And, if you’ve got twelve pages of blathering nonsense at the end of your writing, you know two things. First, you know a little more about your character. Second, you know that you can always tighten that dialogue up when editing time comes around.

How about you? What part does backstory play in your writing process? Are there any characters who have become immortalized in your mind because of the amount of detail that the author put into their backstory?

My Tweets
Join 759 other followers