A tormented ex-soldier.  A terrorist cell out for blood.  A nation at stake.  A family caught in the middle.

“A high-stakes suspense novel with a breakneck pace and strong voice.” – Kirkus Reviews 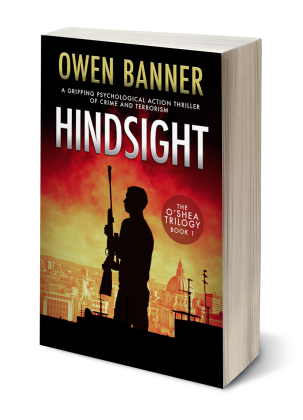 Shirley O’Shea is an ex-con with a history of violence and more than one debt to pay. Haunted by his years as a special forces operative, he’s still trying to make things right for his family when a man named Isaac shows up with a package to deliver and an envelope full of money. Shirley takes the job, and the life he’s spent years rebuilding comes crashing down in an instant. Now he’s a wanted man, a continent away from home, in the company of a terrorist splinter cell. Shirley discovers that there is more than one side to every war and that a tragedy buried in his family’s past may put the future of an entire nation in peril. But to stop that from happening, its going to cost Shirley something he could never have imagined.

Fans of Harvath and Reacher will find a hero they can root for in Shirley O’Shea.

What readers are saying about Hindsight:

“A debut novel about an Irish-American ex-con combines the appeal of the thriller and noir fiction genres in a style similar to that of Lee Child’s Jack Reacher books… Featuring some insightful character development and pedal-to-the-metal pacing, this novel gets its real power from its gritty narrative voice, which is simultaneously jaded and principled… A high-stakes suspense novel with a breakneck pace and strong voice.” ~ Kirkus Reviews

“…A staccato beat of furious double-crosses, stunning revelations and gritty action…it’s paced perfectly. A slick mix of Quentin Tarantino and Elmore Leonard, combined with a deliciously good helping of Irish black humour. The plot is exciting as hell, and his protagonist is the most lovable of rogues…I’m most definitely looking forward to the next installment. I would highly recommend this for fans of offbeat and unpredictable crime fiction. Give it a go. You won’t be disappointed!” ~ John Ling (Author of The Blasphemer and Fallen Angel)

“I was scheduled to go to the biggest beach party in the world and almost missed it because I couldnt put this book down.” ~ Seth (Amazon Review)

The book is full of double cross and rough and ready action all of which take place without the novel missing a beat or slowing down. Surprisingly for a novel in this genre it is more importantly unpredictable in its twists and turns, and this kept me turning the pages until I finished the book. ~ Cate (Goodreads/Cate’s Book Nut Hut)

So, what are you waiting for? Pick up Hindsight now and buckle in for the ride!